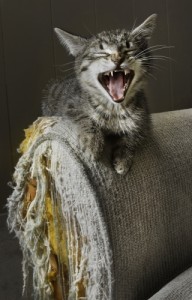 Most cat owners have probably experienced their beloved cat scratching somewhere they shouldn’t be like the carpet, rug, curtains or furniture. The scratching behaviour can be incredibly destructive and frustrating for cat owners to deal with.

For cats, scratching is a natural and necessary behaviour that they perform for a number of reasons including;
* to keep their nails in good order by sharpening them and removing the outer husk of the nail.
* just to stretch out and flex their feet.
* due to anxiety or stress
* as a territory marker by displaying the scratch marks it can mark an area as theirs.
* to mark their territory with their pheromones. When they scratch the glands in their feet release pheromones that mark their territory and make them feel happy and relaxed.

Although it is a natural behaviour most cats can not have a free pass to scratch wherever they please. There are number of ways that you can control or stop your cat from scratching in unwanted areas including;
* Provide your cat with a place that they can scratch freely, like a cat scratching post or mat and place it in an area that they have easy access to. vet-n-pet direct have a wide range of cat scratching toys available in the cat toys section like the KONG Cat Play Mat or the KONG Naturals Incline Cat Scratcher.
* Try using a product to stop them from scratching unwanted areas. There is No Scratch Spray which you spray onto the area to deter them from scratching there. You could also try Sticky Paws which are sheets that are sticky on both sides, one side sticks to  the furniture or carpet and then the other side is sticky which the cat then doesn’t like the feel of so they won’t scratch.
* Feliway Spray can be sprayed on the areas that the cat is scratching. This is a spray that mimics the cats facial pheromones and makes them feel calm and relaxed reducing the need for them to scratch to mark their territory or for stress release.
* Training – cats are typically difficult to train to stop scratching but you can try by stopping them when they are scratching in an unwanted place and moving them to somewhere that you want them to scratch, like a scratching post.

Often when the topic of cat scratching comes up people may discuss declawing. Declawing is the process of removing the claws which involves surgically amputating all or part of the cats phalanges (toes). It is a cruel, painful and unnecessary procedure which, thankfully, is illegal in Australia and many other countries.

Cat scratching can be frustrating but hopefully by using some or a combination of the above methods you may be able to get it under control. And just remember, they aren’t doing it just to be naughty it is a natural behaviour for them and often their way to react to stress or anxiety.