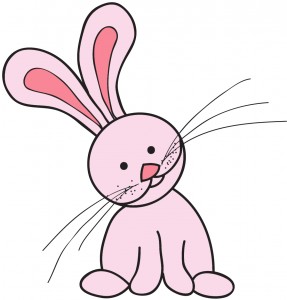 Most children can’t wait until Easter Sunday morning to see if the Easter Bunny has been and left some yummy chocolate eggs. But have you ever found it strange that a rabbit is the one bringing eggs? So where did this tradition originate from?

It was originally the German Lutherans that conjured the role of the Easter Hare / Bunny. The hare symbolised the role of a judge that determined whether or not children had been behaving at the start of the Eastertide season. In a similar role as Santa Claus, the Easter Bunny would visit the good, well behaved children and hand out chocolates, candy or toys.

Another interesting rabbit question I have often wondered about, is why does a magician pull a rabbit out of his hat and not a cat or guinea pig or anything else?

I am still not 100% sure of the truth behind who originated the “pulling a rabbit out of the hat” trick or why, but I did come across one very interesting theory or story. Two magicians known as Barry & Stuart, gave credit to a strange incident as the idea behind the “rabbit from the hat” routine. A lady from Surrey in England, reported that she gave birth to numerous rabbits over a period of time. The event was investigated as it caused quite an uproar and eventually she revealed that it was in fact a hoax.

I thought the reason would be because rabbits are cute, cuddly and perhaps they don’t mind being confined in a small, dark space like a hat. This seems a bit more logical to me, but I do like the story behind the giving birth to the rabbit hoax.

I would like to wish everyone a happy and safe Easter and i hope the Easter Bunny finds your place.