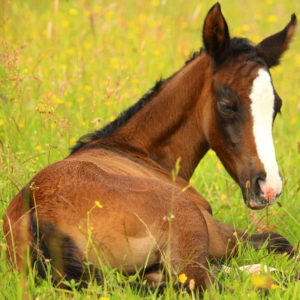 Foaling season is well and truly upon us for another year. It has me thinking about one of the first foals I ever had the pleasure of being there for delivery. His name was Tana and he was a very special little boy. He was always going to be treated like royalty on our farm because he was the second foal to one of our original race mares.

Well Tana certainly was special and he taught us so much about foal health. Tana was what is called a dummy foal, medically known as Neonatal Maladjustment Syndrome, Neonatal Encephalopathy or Hypoxic Ischemic Encephalopathy. It occurs when the foals brain is deprived of adequate oxygen supply at some point during the pregnancy, birth or shortly after birth. Tana’s mum suffered a severe case of placentitis during the pregnancy which was most likely the cause of the oxygen deprivation to Tana resulting in complications as a foal.

Foaling and delivery of Tana was normal however within the first hour of life it was clear that Tana was not a normal healthy foal. Tana took a long time before he was attempting to stand and his attempts were pretty unsuccessful. Once he found his feet (with some help from us to balance) he wasn’t able to locate the mares udder and spent more time walking around in circles like he was lost. We tried holding him up and directing him but even when right on the udder it seemed he couldn’t latch on or suck. He certainly wasn’t right and clearly needed intervention to help him get started in life.

Tana required stomach tube feeding at only a few hours old as it was clear he wasn’t going to get a feed himself. We had hoped that after one feed he would gain some strength and be able to work out how to suck but this wasn’t the case. Tanah was fitted with a nasogastric feeding tube (a tube that goes down the nose directly to the stomach) to make feed time easier. We did try bottle feeding but with the lack of sucking reflex he was unable to get the hang of that.

The next hurdle for him to overcome was the IgG test also known as immunoglobulin type G or gamma globulin test. This is a simple blood test that measures the amount of antibodies in the foals blood to see that they have received enough from the mares colostrum. No surprise to us Tanas IgG test was terrible and he required a plasma transfusion, two actually. It seemed Tana wasn’t out of the woods yet he then developed a respiratory infection which required antibiotic treatment. Lucky for us Tanas mum was one of the best natured mares we ever had and she trusted us completely so handling her foal was never a problem, in fact she didn’t really care at all.

After three days of tube feeding, two plasmas, antibiotic treatment and endless monitoring Tana learnt how to suck from his mum. He was finally coming right and our special little boy was going to become a normal foal, well nearly. Tana was so use to vets that for many months he use to whiny out to the vets in blue overalls, we think he thought they were his mother.

Tana was always special to us and lived his entire life at our farm. He did grow up like a normal horse however he certainly was quieter and extremely easy to handle. He had one ear that was never the right size and actually flopped over like a dog. He was never a very big horse, whether that was due to his in-vitro development or dummy foal problems we aren’t sure. He was broken in but never raced, he just didn’t have the size or ability so we never pushed him, instead he lived his life out as a spoilt grass eating pony with some of our other retirees. Tana would always come to the fence to give kisses and would actually wrap his neck around you like giving cuddle, he was just so loving. Tana only recently passed away at 15 years old but we are so grateful to have had this very special horse in our lives. Tana taught myself and everyone on the farm so much about foal health and dealing with a dummy foal.

Every foaling season brings with it a new challenge, new knowledge or new experience; I wonder what this year will bring?

From a very young age Bec has always had a great love and appreciation for all animals. Bec is a qualified Veterinary Nurse and also has a Bachelor in Applied Science Animal Studies with special interest in Wildlife and Recreational Animals. Her studies have been put to good use working in various animal industries including small and large animal veterinary clinics, horse studs and the family cattle property. Horses have played an important part in her life, living on a horse stud and caring for horses throughout breeding, foaling, spelling, racing and retirement. Bec is the proud mum of two gorgeous girls, a beautiful Cocker Spaniel, a cheeky cockatiel, chickens and many horses including a naughty little pony. View all posts by Bec