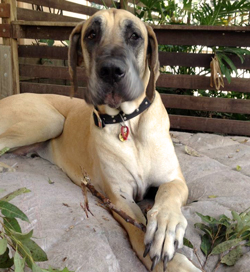 My brothers dog “Junior” is a 3 year old purebred Great Dane with bit of eating disorder.  He sees anything and everything as food and eats it before even thinking and without tasting.  About a month ago he ate a tomato sauce packet, the squeezy type that you put on your pie. His mummy accidently dropped it and before she could even say “no” he had swallowed it.  The vet advised that there was two options, either surgery or observation.  They opted for observation, as Junior had already undergone stomach surgery for bloat a while ago.  They watched him very carefully, monitoring his faeces, his eating habits and behaviour.  Thankfully Junior showed no signs of distress, continued eating and was quite happy.  One day, two weeks after ingesting the tomato sauce packet, he vomited a couple of times and then the third time he vomited the packet up.  Since vomiting it up he has been perfectly fine, luckily the packet did not get stuck in the oesphagus and did not cause any damage to the stomach or oesphagus.  The tomato sauce packet isn’t the only thing that Junior has swallowed, he has also swallowed bottle tops, palm trees, bread packets and a whole packet of soothers.

Over the years I have seen many dogs present to vet clinics after ingesting foreign bodies.  These things have included bottle tops, string, toys, underpants, whole nuts, golf balls, sticks, fruit seeds and stones.  Some cases have required surgery to remove blockages from the intestines or to remove the object from the stomach.  Other cases have involved the vet inducing vomiting to remove the object.  Sometimes observation is just advised with a wait and see approach, to see if the object passes through the intestine itself.

Dogs eating things that they shouldn’t is not uncommon.  If you see your dog eat something or know that he has I advise always contacting your veterinarian.  Your vet will be able to advise what to do and how serious it is based on what your dog has eaten, its breed and age.

Unfortunately and most of the time you are not aware that your dog has eaten a foreign body.  Many swallowed foreign bodies can go unnoticed for a number of days or even weeks until signs or symptoms of a blockage present.  If there is a partial blockage it may cause mild symptoms including intermittent vomiting and diarrhea which may last for several weeks.  If there is a complete blockage it often causes more severe and acute symptoms including diarrhea, vomiting and abdominal pain.  Other symptoms may also include lethargy, not eating, not drinking and general discomfort.  If any of these symptoms are seen or you suspect that your dog has eaten something you should take your dog to a vet as soon as possible to determine the cause and start treatment.